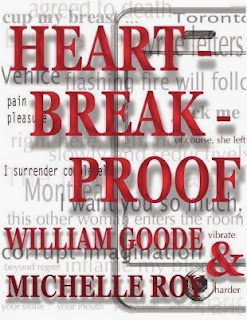 When Marie finally wrote back to Andrew, he truly learned how words can seduce, corrupt and inflame. The stories Marie and Andrew now make up, trading e-mails, consume them. They begin a passionate affair, and their deepening obsession with each other penetrates their writing. Then the stories take over and change everything. Oh, and the bit with the shoe is freaking wild. Fun, well-told, intelligent and absorbing, Heart-Break-Proof is about words that bind tighter than any rope. (Actually, there are ropes in this book too. But mainly words). So, be careful what you read. For a free preview of Heart-Break-Proof (first 3 chapters), check out http://heartbreakproof.com

This book just wasn't for me. The relationship between Marie and Andrew is definitely fun and different. Marie and Andrew type out fantasies to each other through the majority of it. It got old real quick. I felt instead of reading a story I was just reading fantasies that were emailed back and forth between two people. This book is hot but I just couldn't get passed the majority of it switching between emails and real life of the characters. However, if you really like books where most of the story takes place inside emails and your looking for a hot read where most of it is actually fictional for the characters too then try this book for yourself! Most of it is pretty hot. 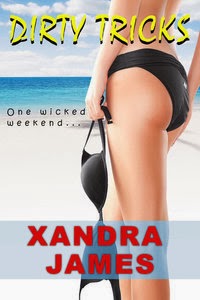 She wanted revenge. He wanted her.
Cat was desperate, but pretending to be a ghost to stop the renovation on the neighbouring manor house was a new low even for her. All she needed to do, though, was slow down the renovation and figure out a way to make the owner pay for stealing her family home years before. Simple.
Everything was perfect until a new guy arrived on site, turning her plans for revenge upside down, and her body to a puddle of lusty mush. But when she finds out the secret he's been keeping, will their attraction be strong enough to hold them together? Or will family ties tear them apart?

Warning: This story contains a large orange cat called Elvis, a fake ghost called Cat, a sizzling hot romance, and may cause you to crack a smile.

Cat isn't happy that the man that basically stole their family home is fixing it up to sell it off. She gets the idea in her head to make them pay. The story is very cute and funny. Jay does what any man in his predicament can do so the real star of the story is Cat. She's funny, strong willed, and has a cat that causes a little mischief of his own. The end of this one is a bit rushed but the story itself is a pretty good quick read. So if you're looking for a quick pick me up during a little free time I recommend picking this one up.
Plus it's currently free so even better!

Naughty Bit
"Jay?" Cat said it softly and thought she sounded sexy.
His gaze finally lifted to hers and the look he gave her was the boost of confidence she'd been waiting her whole life for from a man. She took a deep breath. "I hate you."
She pushed him as hard as she could and the look of shock on his face was classic. But she didn't have time to pat herself on the back. He'd grabbed her hand as he began to fall and now she was tumbling through the air as well, hitting the water with a large splash, knocking the air from her lungs with whoosh.
Surfacing a moment later, she spluttered as Jay's arms were instantly around her. "You play dirty." She thought she heard him say since her ears were still full of water, along with her mouth and nose. They started treading water, staying exactly where they were. Her hard nipples grazed his chest.
Jay pulled her closer and she could feel his erection press against her belly. Gone was the time for their games, Cat realised she wanted to play for real. Maybe even for keeps, now.
Wrapping her legs around his waist, she pulled him firmly in between her thighs, with only a wisp of material separating them.
"So do you," she said just before her lips touched the end of his nose.
Jay wound his arms around her, pulling her tight. "Are you sure about this?"
Cat nodded, never having been as sure of anything in her life. She would deal with the fallout when it happened. And she would apologise if she lost him his job. What they were sharing here was too important right now…
The kiss they shared was urgent but soft. Lips tangled, tongues touched, and Cat hadn't felt more together in her life time. His hands explored her breasts, caressing her, pulling at the nipples, and Cat thought she would explode as sensation after sensation rocketed through her sensitized body.
Jay grabbed hold of the side of the pool and braced them both against it. Devouring her mouth he slipped his hand between them and in to her bikini bottoms, rubbing gently. Cat shivered, pushing against his hand and writhing as feeling after feeling washed over her.
Jay wrapped his arms around her then, pulling her under the water with him as they carried on kissing before bringing her back up again moments later, their mouths still joined in a kiss.
Then she was being hoisted out of the water where she landed on her backside on the pool edge, the cooling summer air sent goosebumps where they shouldn't be. Jay slipped in between her legs, and pushed her knees apart before settling his warm mouth against her inner thigh. Jay's tongue danced across her skin, sending prickles towards her centre. And then his mouth was on the material in between her legs, and she was in heaven.
An even better than chocolate, heaven.
Cat leaned back on the cool tile, resting on her elbows, and pushed her hips toward his eager mouth. . Her mind went blank to all except feeling his tongue against her, bringing her slowly to a climax. Finally, after what felt like an age, he pushed the fabric to one side as his tongue glanced over her most sensitive spot.
Whatever she'd been feeling for Jay over this past week escalated until the pressure could go no higher. She lingered there for moments as her hand pushed through the wetness of his hair, and then she was falling, out of control and into the most intense moment of her life.
Time passed as she lay back on the cold tile, her body coming back down to earth. Her thoughts jumbled and her skin ached. But she was sure of one thing. She needed to feel Jay inside her. 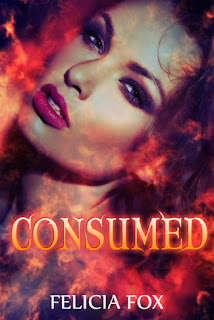 Felicity has never met someone like Alex before. Alex literally glows from their lovemaking. For the first time, Felicity is in love, but the woman she's spent the last two months with may not actually be a woman at all. Felicity knows that Alex is something more, but she doesn't know exactly what. Allowing Alex into her life might be the worst mistake she's ever made.
Felicity has gotten herself in a bind... and it's a hot one.  I really like this story. For a short it's written fairly well and you can just escape into Felicity's troubles and desires.  In 25 pages something normally has to go, but the characters stand out and their personalities shine. There are a lot of short hot moments to enjoy within these 25 pages, keeping them short seems to balance the story out flawlessly. Writing something this short is hard for many authors, but Felicia pulls it off!  My only real issue is the over use of pronouns. I know that sounds real silly and I'm sure others won't even notice it. I read a great deal and for some reason they really stood out when reading it. I had to call my husband at his work to tell him he should read it and came up while visiting friends and family during the holiday break. It's a keeper. I can't wait to read more to find out what happens next.